I have had my fair share of metal festivals: 5 Carolina Rebellions, 4 Warped Tours, and 1 Mayhem Festival. Although I have seen tons of people at these events, I have seen the same theme in people at all of these shows. There are usually a handful of people that have these characteristics at every festival that I have been to. You have probably seen these people too, they are hard to miss.

The Guy Who is Severely Injured.

This is the guy who throws down in the mosh pit. He goes crazy in the pit doing weird dances and crowdkilling anyone in his way. In the pit, he will usually get seriously hurt… whether that be getting cut by a fellow mosher, getting kicked in the face by a crowd surfing, or hurting himself. You would think that he would stop and go get medical attention at the emergency tent, but no. This guys just yells “WOOOOOO” and keeps moshing. He acts like nothing happened and he continues to go crazy. I went to the Carolina Rebellion, and I saw this one guy get his jaw broken by a crowd surfer, this man just held his jaw in place and continued to jam out until the band’s set was over. These guys are insane… The Saw approves. 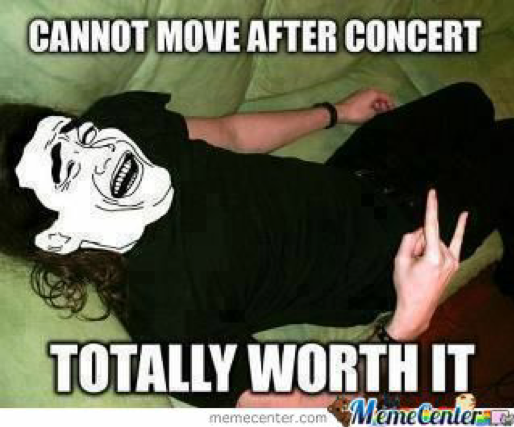 Okay, these homies are, literally, the best when it comes to an outdoor music festival. You’ll be standing there in the hot sun, with all these other people around you waiting for the band to come on, wishing you had something to cool you down and then BOOM. My man with the water dispenser will throw his hand up, and start hydrating the crowd. A wide range of “WOOOOOO” and “YESSSSSSS” will be yelled during this time. These fine fellows are a gift to music festivals. Thank you for your support. And let’s face it, they are the most popular people at the festival because people will come up to you and talk to you just so they can get hosed down. Do not overuse your power kind sir. 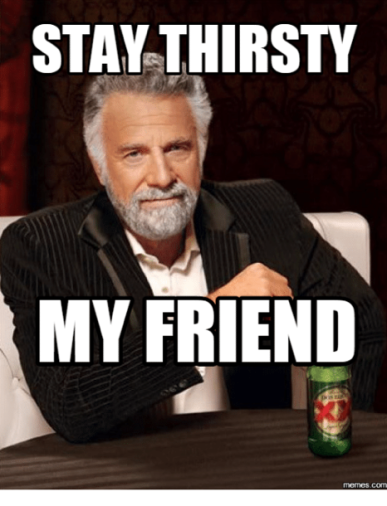 Okay, so these dudes might be the most popular people at a festival because everyone wants to take a picture with them. What is so great about this is that you can make a total fool of yourself and NO ONE WILL KNOW WHO IT IS! I love these guys and they are great entertainment. You know these dudes, they wear banana costumes, Power Rangers outfits, they dress up as hot dogs, hamburgers, and mustard bottles. A popular one is Waldo, but that is too basic nowadays. I saw one guy wearing nothing but a speedo and a horse mask one year. That man is a legend. Don’t be surprised if homegirl here brings the shark mask to the Carolina Rebellion this year. I have yet to see a shark costume at a festival and crowd surfing. Let’s make this happen.

These are the dudes that go around the festival trying to find all the free gifts. These free items can range from food, drinks, and merchandise, etc. Usually decked out in a Jägermeistershirt and he just goes around taking all the free promotional stuff that he can get. It doesn’t matter what it is, they will take it. They are literally a walking advertisement for any company. Now, I would say that these types of people are annoying, but since being in college, I too enjoy getting free t-shirts from time to time. But don’t worry, The Saw will only take free stuff at festivals if it’s food. Because we know food will break your bank at a festival.

This is self-explanatory. These girls are everywhere, singing the songs and jamming out to the band. I gotta be honest, I have been on a couple of guy’s shoulders during festivals and you do get a better view of the crowd and the band from up there. But, I have been on the other side of that situation where YOU CAN’T SEE ANYTHING BECAUSE OF THE GIRL ON A GUY’S SHOULDERS!!! It’s like a freaking totem pole that you can never get around. But have no fear, other people hate it too and will push these people into the pit, or they will get hit by a crowd surfing and they all will come tumbling down. Some of these girls will be asked to flash, and some of them will happily do it. Then a chant of “WOOOOOOO” will go around. Now don’t be fooled, girls aren’t the only ones getting on guy’s shoulders. I have seen dudes put their bros on their shoulders. They show their boobs and swing their shirt around, and it looks like they are having a blast.

The Guy Who Shouldn’t Be There

This person is at the barricade for a band, in the front. A place where a metalhead would LOVE to be for their favorite band but… this guy isn’t even into the music. No one knows why he is even at the show. He just stands there on his phone, not even paying attention to the show at all. They are the ones that get mad if you bump into them and then throw a fit because you touched them. These guys are also just randomly in the crowd, but it is especially annoying if they are in the front, and they don’t even care about the music. Here is a quick tip for these fellas: DON’T BE IN THE FRONT IF YOU’RE NOT GOING TO JAM AND DON’T GET MAD IF YOU GET HIT!!! YOU ARE AT A METAL SHOW, GET USED TO IT OR LEAVE. If metalheads see these types of people at festivals, we automatically mess with them just to piss them off. It’s great entertainment.

Now, I know what you’re thinking… this is the guy who knows what the weather is doing, is prepared for any type of weather, and is checking the radar for rain (hey, dad!). BUT NO!!! This is the guy that isn’t affected by any type of weather whatsoever. It can be scorching hot, and he could be getting burnt, but does that stop him from taking his shirt off and running around? No. It could be pouring down rain and this man will be yelling, jumping up and down, having an absolute blast like it’s a sunny day. It can also be really cold, and this guy will still walk around with his shirt off (doesn’t matter if they are fir or not). These guys are a rare species and they scare me.

This is the guy who seems like the most calm, cool, and collected guy at the show. He just jams by himself, minding his own business, and seems like good company to be around, right? YOU THOUGHT WRONG. Right when his favorite song comes on, he goes absolutely insane. He will push past everyone, get inside the pit, and be the hardest one jamming out. This guy is like a bulldozer because he will plow anyone that is in his way once he is in the zone. He somehow gets from all the way to the back, to the front of the crowd in seconds. But after that one song, he will calmly walk back to his original spot, and be chill again. How do these guys do it? These are also the guys that scare me.

This is the guy that is wearing a band shirt of a band that is playing at the festival. Usually, these are the people that love that band and can’t wait to see them live. There are a lot of those, but then you have the people who will be wearing the band shirt of a particular band but then won’t see the band once they go on stage. For example, at the Carolina Rebellion, this guy was wearing a Wage War Shirt. I talked to him before Wage War’s set and I saw him after their set. I asked him what he thought about their set and he says, “Oh, I didn’t see them.” WHAT. THE. HECK?

Bonus: The Pantera shirt guy. We all know this dude, this is the only band shirt that he owns that he knows for sure is metal and that people will know the band. They are usually drunk. I have never seen a guy wearing a Pantera shirt that’s completely sober.

I understand the people who get paid to film bands, it’s how you make a living, I get it. But the ones who just stand there in the middle of the crowd, with their arms up in the air filming the show are the people I despise. We both know that you aren’t going to go back and watch the entire show again from your phone. And with Snapchat, we see shows all over people’s story (I am guilty of this, but I don’t film the entire show. I will do 10 seconds or so of a band and then I will jam out the rest of the time). It is really annoying to be behind someone who is filming the entire show. I think this is more annoying than being behind someone who is on someone else’s shoulders (at least when you push them they fall). A lot of people will flip off the camera and yell some choice words. But don’t be appalled, we are all thinking it. 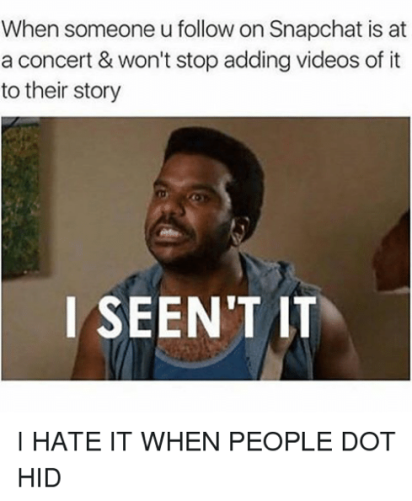 These are the girls at shows that act like one of the guys. Which I’m cool with, girl power, dude. These girls are the ones punching, pushing, and kicking guys in the pit and bagging on them when they won’t hit her back. She will pull the gender card and then continue to attack males. They are usually wearing Arch Enemy shirts (who I love). But they will wear the shirts and bragging that they have a female vocalist. You should see the look on their faces when I ask if they knew the original singer was, in fact, a man.

Do I even need to explain this one to you guys?

I am expecting to see every single one of these people at all the festivals that I go to. Now don’t get upset if you fit any of these categories. You were so relevant that I had to write a blog post about it. Be honored of your title and wear it with pride! I’m looking forward to seeing you in the pit.