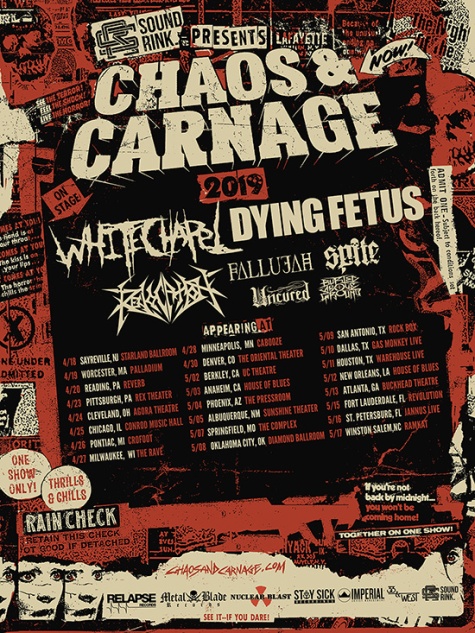 I got to the Ramkat before doors opened because I bought VIP tickets to meet Whitechapel. I have never met Whitechapel before so this was exciting for me! The meet and greet was supposed to start at 3:30, but it didn’t start until 4:15; 15 minutes before doors opened. When I was in line to get my Whitechapel poster signed, I was thinking about how I was going to tell Whitechapel that I am The Saw and how much of a fan I am without sounding like a fangirl. They appreciated my support for the band and Phil Bozeman (vocalist) also said, “Go Wolfpack.” I also got a picture with the band, so I now have proof that I met my favorite band.

There were some opening bands that came on and they set the tone for the whole night. One of the bands that opened up for this show was Primordial Tides from Greensboro. I have seen them a couple of times and each time I see them, they get better and better. After the opening bands, Fallujah came on. I have never seen Fallujah before and I was really impressed! They sounded great and there was a good crowd for their set. I started listening to this band more after the show and I really like their sound. They are a very technical band and I’m glad I got to see them.

Spite came out and completely dominated the crowd. Spite’s singer, Darius, is one of the best front-men I have ever seen. He was in the crowd’s face the entire time and he was running around the stage the entire time. Right when he came running on stage and yelling at the crowd, people automatically started moving and getting rowdy. The band sounded really good and Darius can hit his highs and lows perfectly. Probably one of my favorite vocalists right now. 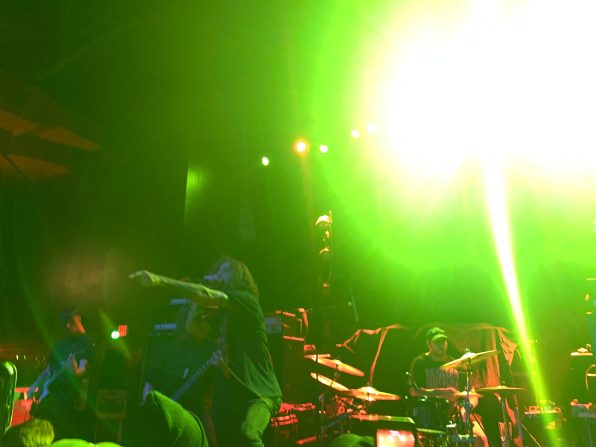 The next band to come on was Revocation. They have that old school thrash, death metal sound and the crowd really loved this band. People were moshing and headbanging during their entire set! They set the tone for the next two bands to come! 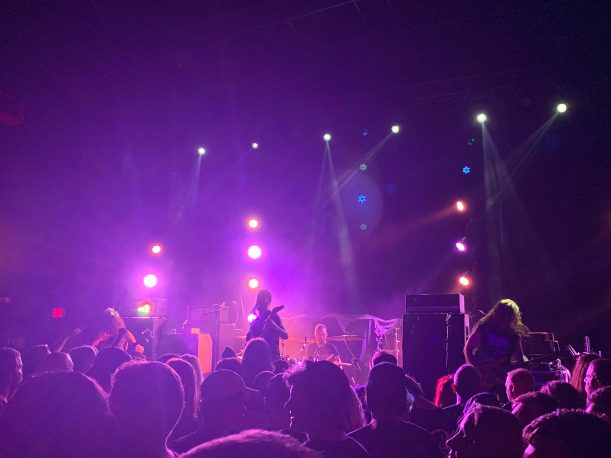 Dying Fetus came on next, and we both know how much I love Dying Fetus! I am still mind blown by how technical, fast, and brutal this band is with only three people. They have been at it for over 20 years, and you can tell! And with both, the bassist and guitarist laying down gutterals (yes, doubly awesome!), it was insane. Right when they hit the stage, the crowd went crazy. There were certain times when no one was standing still and everyone was in the pit. I don’t know why but almost every guy in that building took off their shirt when Dying Fetus came on!! (LOL) They played some of my favorite songs, such as Fixated on Devastation, Panic Amongst the Herd, and Subjected to a Beating. I moshed a lot for them, but for the most part, I stood there in awe.

Whitechapel headlined the show and they came out with their song, When a Demon Defiles a Witch. They played a handful of songs off their new album, The Valley, and during that 5-song stretch is when the crowd went absolutely insane. No one was standing still when they started playing Brimstone and Black Bear. I was moshing and yelling the words to every song and I eventually pushed my way up to the barricade. Phil is also a great front-man. He was hovering over the crowd (standing, most of the time, on trademark risers) and interacting with us the entire time. He had command over the crowd and really whipped us into a frenzy. He also has some of the best vocals, live, too. When they played Brimstone, I was shocked, impressed, and in awe when Phil hit that low note; it was beautiful. Whitechapel also played Mark of the Blade, Elitist Ones, Let Me Burn, and The Saw is the Law.

Overall, this was one of the best shows that I have been to this year. The set up and tear down was quick and easy, and the sound of every band was clear! The light show for this show was also really cool. The venue impressed me as well. The Ramkat is very spacious and there is a lot of room for people. There is also a balcony (with its own bar and bathrooms) that people could pay extra to sit in. The security was tight, and I’m okay with that. All the staff were great and everyone did an awesome job. I will most definitely be back  to this venue.

Did you go to the Chaos and Carnage tour? What did you think?