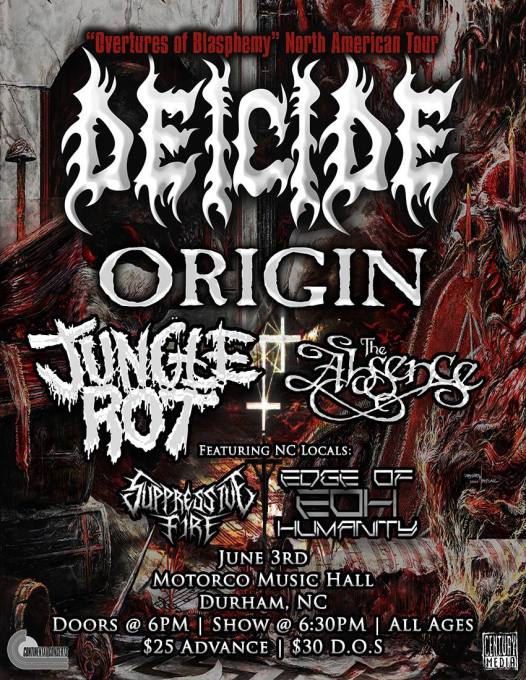 What’s going on Butcher Crew!? I went to see Deicide, Origin, Jungle Rot, and The Absence in Durham at the Motorco Music Hall. This was the last date of the tour and I was excited to go to this show because I haven’t seen any of these bands, and I have never been to this venue before.

The venue is really nice! Along with the bar, it also has a restaurant right beside the music hall, so it was convenient to get food and drinks throughout the show. The venue did have parking that you could pay for and have a reserved spot, but since I bought my ticket a few days before the show, I had to get street parking. The venue is really spacious and has a lot of room for standing. There was also benches up the left side of the venue that people could stand/sit during the show. I would love to come back and see another band here!

The first two bands to play were local bands. Edge of Humanity is from Raleigh and they are a blackened death metal band. I was really impressed with them and I loved their riffs in their songs. Suppressive Fire is also from Raleigh and they are a blackened thrash band. I was also impressed by their set as well. Be sure to keep a look out for both of these bands and try to catch them live when you can!

The Absence came on next and this is when the crowd started to get into it. I would say that they are more melodic death metal, which I really like. They were really interactive with the crowd and set the tone for the bands to come. During their set, they Facetimed their bass player (he was at home in Florida) and he was so excited to see all of us at the show. After their set, the singer yelled “BYEEEEE” in a high pitch girl voice and it was hilarious.

Jungle Rot was next and this was the band that I was most excited for. I really like this band because they have that old death metal sound, but also groovy riffs. They remind me of Obituary in a way. The crowd was the craziest for Jungle Rot. There was a circle pit their entire set and it was pretty impressive. There were some guys who were marching in the pit and would shove people straight to the ground. That wasn’t really cool, but there were no hard feelings. I ended up getting in the front for them and I jammed the rest of their set. You can’t help but head bang when Jungle Rot comes on and almost everyone in the venue were either moshing, dancing, or head banging. 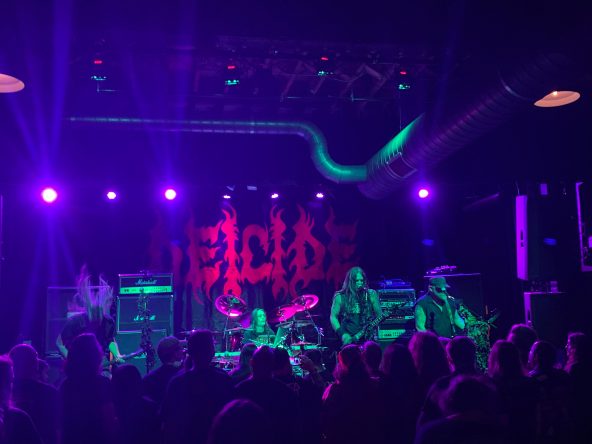 Origin came on and the energy that Jungle Rot brought slowly faded. A lot of people left after Jungle Rot so there wasn’t many people in the pit. I liked Origin’s set, they really tried to interact with the crowd, and it paid off. The singer kept telling us to mosh, head bang, crowd surf, and stage dive. They have some really good riffs that you can jam too and also some old school thrash riffs.

Deicide was the headlining band, and I was impressed with their set. They had a red light on them the entire time and it gave an eerie feel to their set. I literally felt like I was in hell. There were some people in the pit moshing, and also some crowd surfing. There wasn’t much of a stage show, so it was hard to keep my interest on their set, but they sounded terrific.

Overall, I really enjoyed the show! I did not get the memo to wear a band shirt and camo shorts/pants. Almost everyone at the show was wearing camo pants… very Obituary… maybe it’s a Florida death metal thing? During the show, one of the bands roasted/singled out a girl for crowd surfing and the singer said, “ladies, don’t wear shorts to a death metal show.” She was the only female to crowdsurf and I feel bad that she was singled out like that. To all my ladies, wear what you want to a metal show. If you feel great, don’t let ANYBODY (especially some guy in a band) tell you that you can’t wear something.