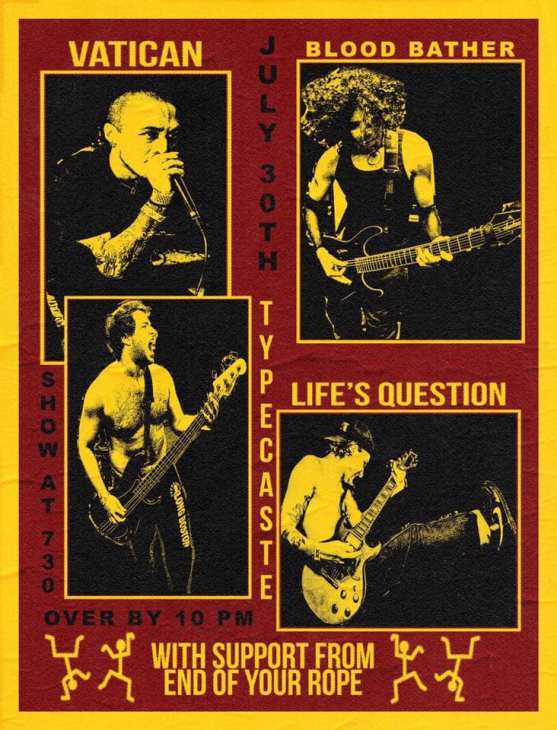 You read that right, y’all I went to a show that was in the back room of a barber shop in Winston-Salem. Now, the barber shop was cool as hell. They had leather couches, mirrors as walls; they also had some band shirts, and Harley Davidson shirts! The room that the bands were playing in was a decent size and it had some room for people to mosh and dance. There was no AC in the back room, though, so it was really hot. But other than that, the show was great! I wouldn’t mind going back to the Ardmore Barbershop to see a show!

The first band to perform was End Of Your Rope, a local band from Greensboro! Their riffs are undeniably head banging worthy. This was my first time seeing them and I was impressed! I would love to see them again soon! Life’s Question was the second band to perform and people started moshing and dancing around a little bit more for them.

Bloodbather was next and besides Vatican, this was the band that I personally came to see. They stole the show that night. The singer was moshing, everyone in the band was headbanging, and the pit was rowdy as hell when they came on. Their energy and stage performance is a sight to see and their music tops it all off! One of my favorite bands to see live!

Typecaste was the second to last band and most of the crowd left, but the people who stayed were jamming their asses off! The guitarists was hitting people in the crowd and marching around with his guitar… it was so metal. I bought a shirt from them and it goes so hard 10/10 would recommend their merch.

And finally, Vatican took the stage! This was my second time seeing them! I saw them for the first time a couple of months ago in Greensboro! I was excited to see them again because I really like their music and they also put on a great show. They were on a time crunch because the show had to end by 10pm and it was 9:40pm by the time they got on… let’s just say for those 20 minutes, it was chaotic.

This show was really enjoyable because all the bands were good, the venue was great, and I got to catch up with some friends. It’s a Win-Win-Win for ya girl!

Have you seen Vatican or any of these bands before? What did you think?