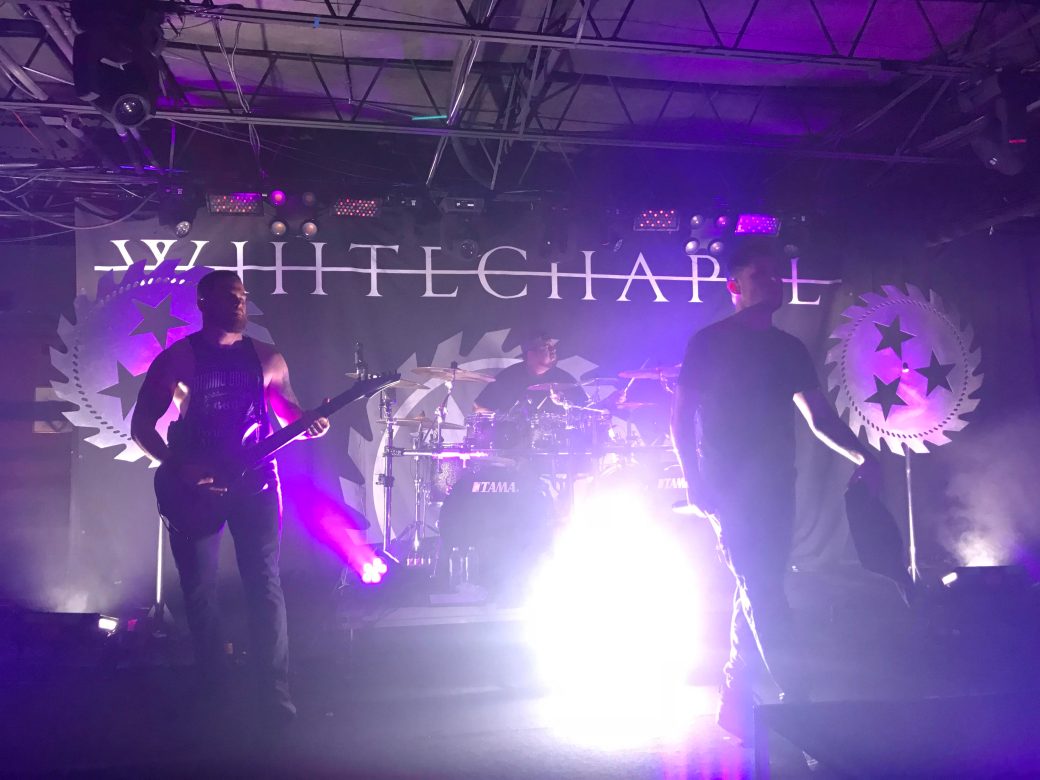 I was looking forward to this show because Whitechapel is my all-time favorite band! This was my third time seeing them and every time it’s like it’s my first. I got to the venue four hours before the show started and I sat there in the front of the line until the doors opened. I have “Show Buddies” – friends that I meet-up with at various venues and festivals – who were also there! It was like a small reunion for all of us. This was my first time going to the Underground in Charlotte, NC and I really liked the venue. It was very spacious and there was plenty of room for everyone.

The first band to play was So This Is Suffering. It was my first time seeing them, and I was impressed. The singer is a good front man and really knows how to work a crowd. Speaking of the crowd, there was a little movement, a few pits, and some diehard fans that yelled every word to every song. Some of the songs that they played were: Sleeper Hold, Surveil, Dreameater, and Palace.

Next up was a band called, Entheos. I have never heard of them, but they put on a good show! I was getting Arch Enemy vibes from them (and not just because the lead singer is a girl) – there were great melodies and the singer was entertaining to watch. The crowd responded as with the first band, there were some pits but they weren’t as rowdy as other pits that happened that night. Among other songs in their set, they played: The World Without Us, Inverted Earth, Sunshift, and Pulse of a New Era.

Rings of Saturn played next and I was really looking forward to seeing them! I have been listening to them for quite some time and this was my first time seeing them live. Their sound was really good, but there wasn’t a stage show. Because of this, the crowd wasn’t getting into their set. Some of the songs that they played were: Margidda, The Relic, Harvest, and Inadequate.

The second-to-last band to play was Carnifex. This is my second time seeing them and they are amazing, live! Their stage show was insane!! They had pentagrams on stage, and they were all dressed up. They had a good mixture of older songs and newer songs. The crowd was ROWDY! Everyone was moving, there wasn’t a single person in that venue that was standing still. Everyone was moshing, and singing with the band. Some of the songs that they played were: Slit Wrist Savior, Slow Death, Lie to My Face, and Hell Chose Me.

And finally, the band that I have been waiting to see all night was up: Whitechapel. While waiting for the band to come on, the crowd was singing “Sweet Caroline.” I was in Charlotte, and the Panthers just won a game, so you could say we put the “lit” in Charlotte. I was on the barricade; in the front for Whitechapel, and I was jamming! The light show was impressive and their live sound was the same as if I was listening to their albums. The crowd was absolutely insane and was hyped the entire time. The band was feeding off our energy too and kept egging us on to get even more rowdy. They played some of my all-time favorite songs such as: Mark of the Blade, Elitist Ones, The Saw Is the Law, and This is Exile. Shout out to Ben for giving me a guitar pick, and Gabe gave me the set-list for the show. So I would say the show was a success.

To make things even better, while I was waiting in line to get inside the venue, my mom went to get some food and literally ate dinner with some of the members of Whitechapel. She got me some autographs, and also a video. What is that video you ask? It’s a video that has Whitehchapel saying, “We are Whitechapel and we love Erika, The Saw, and WKNC 88.1.” So yeah, that literally made my life.