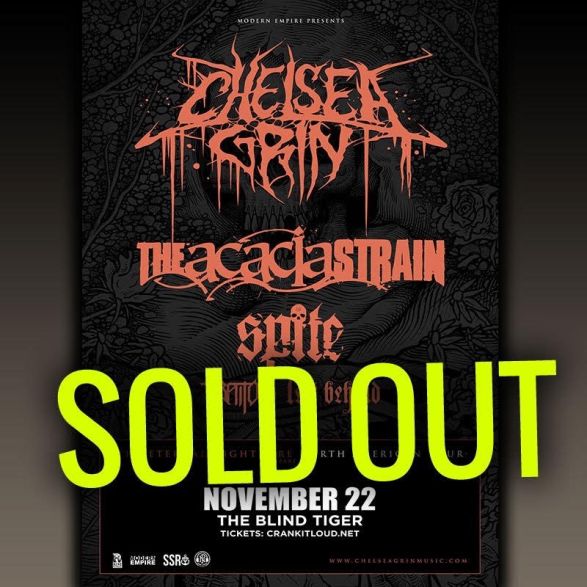 Okay, I’m not gonna lie, when I saw this lineup, I screamed. You have Left Behind, Traitors, Spite, The Acacia Strain, AND Chelsea Grin all on one bill?? ICONIC. This show sold out the day of the show and the Blind Tiger was packed with people. I went to this show with two of my friends: Sarah, who I trained as a metal DJ at WKNC, she is a real good friend of mine and all we do is listen to metal and send each other metal memes. I love it. I also took my friend Andrew who works at WKNC with me. Andrew does not listen to metal on a regular basis, but when I play it at the station, he really likes what he hears, and we are always having discussions about the evolution of music. When I told him about this show, he was down to go and he ended up having a great time!! I am close to converting him into a metalhead!

When we got to the show, the first band, Left Behind, was already playing (we got stuck in traffic, smh). But where we were in line, you could hear the band clearly and they were jamming! I was dancing in line and having a good time. The line was so long that by the time we got into the venue, Left Behind was finishing. I hate that I didn’t get to see them, but I bought a bomb ass hoodie from them so it is okay. 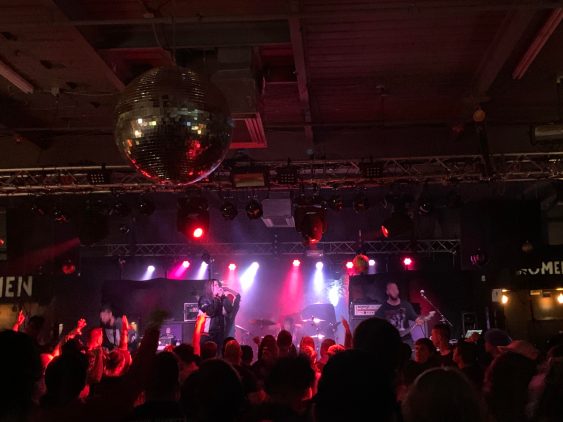 The next band that came on was Traitors and I have seen them a handful of times and they never disappoint me. Their singer, Tyler, has some great vocals that always leaves me in awe. He is really good at hyping the crowd up because he always says, “is that all you got Greensboro? Destroy this s***!” He was very entertaining to watch. Their light show was great, and the crowd really got into them, from what I saw. We were shoulder to shoulder in that venue due to it being a sold out show. Sarah described Traitors as a band that every song is just a big ass breakdown and I totally agree. Love it. 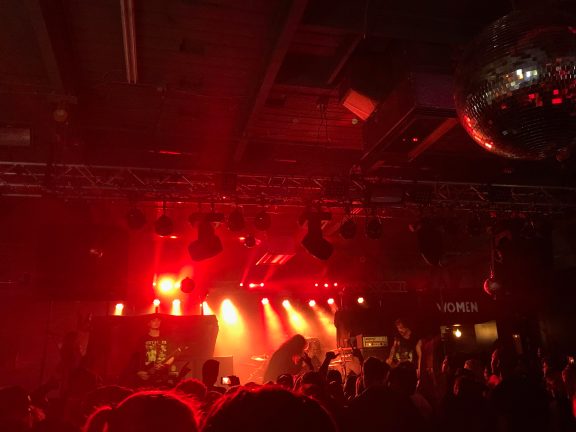 Spite came on next, and I love Spite. Their energy on their albums, and live, is top notch and can’t be beat. Every time I listen to them, I get this burst of energy and I feel unstoppable. Darius, their singer, is one of the best front men I have seen. Not only does he have insanely great vocals, but his stage presence is awesome. He comes on stage yelling and running around and it immediately gets the crowd hyped. When he sings, he will wiggle his eyebrows and make these funny faces; he is simply, just fun to watch. They played some of my favorite songs, mainly, Kill or Be Killed. Andrew was really digging this band, and he actually got in the mosh pit for Spite!!!! He was jamming hard. 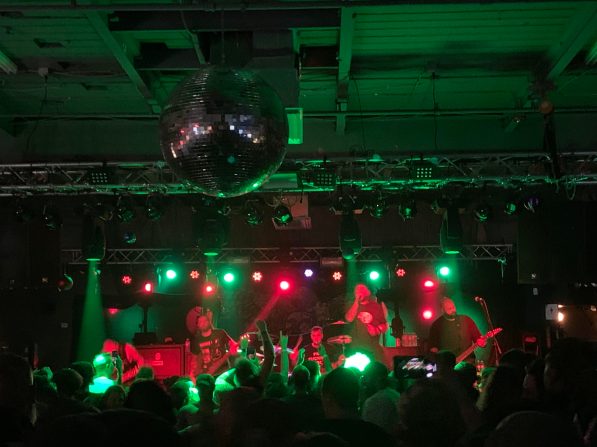 The Acacia Strain came on and a lot of people were looking forward to seeing them. They are one of the bands that has a lot of respect in the scene and have a huge following. Their singer thanked all of us for being there at the show and told us to have a good time. Their sound was phenomenal live and the singer’s voice was perfect. His low growls were impressive. But to me and my friends that I went to the show with, we felt that The Acacia Strain could not follow Spite. Spite kicked our asses!!! When we sat outside, we could still hear the band and from what I heard, they put on a great show.

And now the band I have been waiting for, Chelsea Grin. I have seen Chelsea Grin various times but I have only seen them twice with their new singer, Tom. Tom used to be the singer for Lorna Shore, but then came to sing with Chelsea Grin. I love his voice and he really brings more energy to the band. The last time I saw Chelsea Grin was a few years ago at the Blind Tiger and I was in awe. When they played Across The Earth, their melodies in the beginning with their light show is something that I will never forget. I got chills just watching it. The first song that they came out with when I saw them recently was Recreant, which is easily one of their best songs. I lost my mind when they started off with this song. They instantly brought the energy and the crowd went wild. When Recreant began playing, I crowd surfed up to the stage and their bass player helped me up on stage!! How nice!!! I then stage dove, crowd surfed back to the stage, and stage dove again. It was awesome. They played some killers songs, like Playing With Fire, My Damnation, and Dead Rose. Their light show was amazing, and their overall sound was really, really good. Definitely a band you all need to see live. (pic here)

Did you go to this tour? What were your thoughts?