So, there has been a trend of people posting their 2019 Spotify lists of their top played artist, songs, and podcasts. I like looking at these because it gives you a recap of what you have played throughout the year, and this year Spotify gave listeners the top artist, bands, and songs of the decade.

My top genres that I have listened to the most this year from least listened to most listened are groove metal, hardcore, melodic metalcore, lo-fi beats, and pop rap. I am kinda surprised by this because I listen to a lot of hardcore influenced bands and a lot of death metal so I am shocked I have not listened to these genres more than what is stated in my 2019 wrap up. I do listen to a lot of lo-fi because the rap that I enjoy most is the type of rap that has soft hip-hop beats and has a jazzy vibe to them. One of my favorite artist’s that describes this genre is Isaiah Rashaad. Pop rap I could see because I listen to a lot of Travis Scott, Lil Uzi Vert, and 21 Savage. The majority of my friends that I hang out with do not listen to metal so I play a lot of my other playlists that are more rap influenced.

My top four artist of 2019 are Tash Sultana, TLC, Boundaries, and Whitechapel. This did not surprise me because I know I have spent a lot of time listening to these artists. I discovered Tash Sultana in late 2018 when her album Flow State came out. She is an artist that is unlike any other. It is hard for me to describe her style because she incorporates many elements from other genres. I would highly recommend listening to her. Now, TLC, I have been listening to for years and their 1994 album CrazySexyCool is my all-time favorite. It was my anthem for 2019 so it would make sense that it appeared on this list. I ACTUALLY HAVE METAL ARTISTS ON THIS LIST THANK GOD!! I discovered Boundaries in early 2019 and have repeatedly listened to their album Hartford County Misery at least every month. It’s just so groovy and heavy that I can’t stop listening to it. Is anyone surprised that Whitechapel made the list? Because I’m not. I got my DJ name from them for crying out loud so I think that explains itself.

My number 1 most played artist this year, however, is Saweetie. I know Saweetie and everything that she stands for. I discovered her late 2019 and if she is my number 1 artist, this should tell you how much I love her music. I bump her songs all the time and I am not ashamed of it what-so-ever. 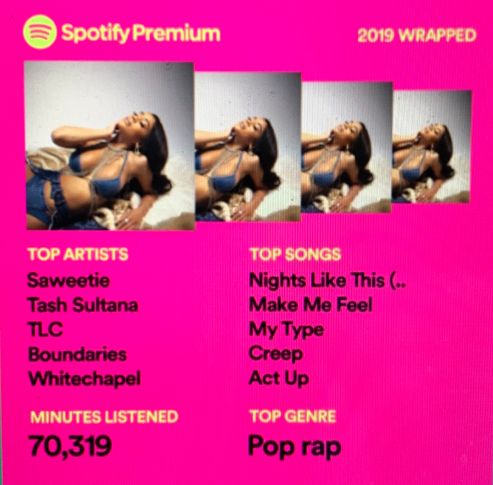 Here’s the funny thing, none of my top played songs in 2019 are metal. I can’t even believe that. My top played songs are: Nights Like This (feat. TY Dollar Sign) by Kehlani, My Type by Saweetie, Make Me Feel by YBN Cordae and YBN Almighty Jay, Creep by TLC, Act Up by City Girls, Egyptian Joint (All I Need) by Young Bull (North Carolina locals), Ball w/o You by 21 Savage Casual by Doja Cat, Kream (feat. Tyga) by Iggy Azalea, and Pissed by Saweetie. All I can say is… I was having a “hot girl” summer okay? Ok.

But my number 1 artist of the decade is Upon A Burning Body (finally, I gained some of my metal creds back). This really doesn’t surprise me because over the decade, I have listened to a lot of Upon A Burning Body. I love every single one of their records (mainly The World is my Enemy and Southern Hostility). I know every word to every song and the band knows this, they have pointed me out at shows because I just yell everything back to them.

Here are some more stats of my tops of 2019 and of the decade. I am not surprised, but disappointed that my top artists of the decade were metal but my top songs and genre are not. I promise I am more metal than what Spotify gives me credit for.

What bands, artists, songs, and genres made your Spotify Wrap Up?