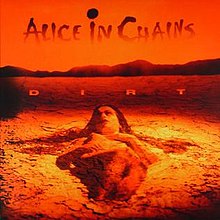 Alice in Chains is one of my favorite bands of all time. My mom used to play them all the time while I was growing up. I remember riding in a Ford Ranger when I was 5 and my mom would play Rooster while we were driving down the road. It is a distinctive memory that I will always cherish.

Layne Staley (RIP) is one of my favorite vocalists because you can hear the beauty, pain, and sadness in his voice. He had such a powerful sound and his voice was like listening to a wounded angel. Mix Staley’s voice with the harmony of Jerry Cantrell (guitarist) and you end up with a masterpiece.

I like the overall sound and variety that is on their 1992 album Dirt. It is one of my 10/10 albums as well! A lot of my favorite songs come off this album (Them Bones, Rooster, Junkhead, Angry Chair, and Would?). Down In A Hole is also another song that is well-known to a lot of music fans.

Dirt is the second studio album that was released by them and it peaked at No. 6 on the Billboard 200 chart. The album was also well received by music critics. It has been certified four-times platinum and has sold 5 million copies worldwide making Dirt the band’s highest selling album to date. It was also the last album recorded with all four original members (bassist Mike Starr was fired from the band in 1993). Shortly after the release of this album, the band was invited to open for Ozzy Osbourne on his No More Tours tour in 1992.

Rooster was inspired by Cantrell’s relationship with his father, who served in the Vietnam War. It was written from the perspective of his dad while he was traveling through the jungles and trying to survive.

If you haven’t listened to this album in its entirety, I definitely recommend that you do. It is one of the most popular Alice in Chains album and it is not a surprise to me that it is.

What is your favorite song off of Dirt?