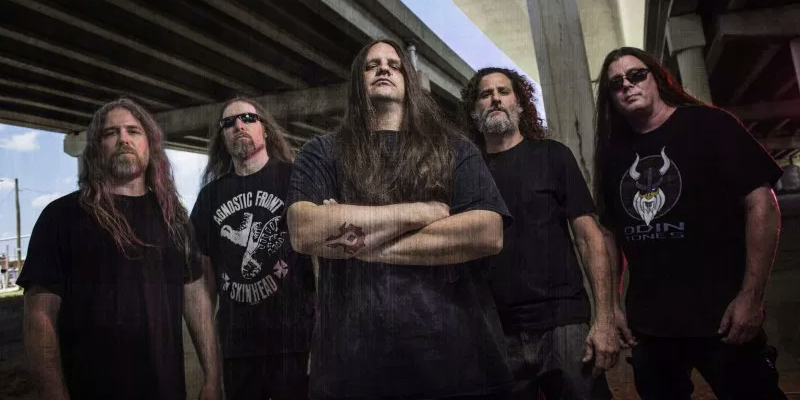 Cannibal Corpse is one of the bands that I grew up listening to. My dad would play them all the time because they are one of his favorite bands. I distinctly remember hearing Hammer Smashed Face growing up (and also hearing the Radio Disney version which is hilarious!!!). I also remember seeing Cannibal Corpse on Ace Ventura’s Pet Detective when Ace was in the club. Cannibal Corpse was the band playing and is one of Jim Carrey’s favorite bands!!

Corpse has had little radio and television exposure throughout their career, but developed a cult following after their second and third records were released in 1991 and 1992. As of 2015, they achieved worldwide sales of two million units for combined sales of all their albums. This makes them the top-selling Death Metal band of all time.

Bassist Alex Webster came up with the name Cannibal Corpse. They have had several lineup changes in the band and only Webster and Paul Mazurkiewicz (drummer) are original members. The lyrics are drawn heavily on horror fiction and horror films. Their original singer, Chris Barnes, wrote the lyrics for the band, but when he left and was replaced by George “Corpsegrinder” Fisher, so Paul started writing most of the lyrics (and you can tell the difference in the lyrical content between the two writers). One thing that hasn’t changed is the solid beatings and groovy riffs like only Cannibal Corpse can deliver.

Here is how I explain their sound to someone who (oddly enough) hasn’t heard them: Pound. Pound. Roar! Groovy riff. Gutteral! Scream!! Pound. Pound.

I have seen Cannibal Corpse a handful of times (my favorite time I saw them was on Valentines Day, in Wilmington, NC where they toured with Obituary and Cryptopsy). Around age 8, I met Corpsegrinder (yes his neck is that big in person) and I also met their drummer, Paul! I told Paul that I saw them on Ace Ventura’s Pet Detective. He laughed and said, “That was a long time ago.” And it was a long time ago, now, that he said that!

Have you seen Cannibal Corpse? What is your favorite song? Mine is Evisceration Plague.